Posts from the “Uncategorized” Category

New at TNB: We Can Dance if We Want To

I sat near the back with a program folded in my joined hands as composer Jerry Goldsmith took his position before the symphony to a polite flutter of applause. I wore the same dress I’d wear months later to my high school graduation. Ruffles on the cap sleeves, tiny cloth-covered buttons, narrow all the way down. An idea of adulthood I’d squeezed into too soon. Most likely I hadn’t told my friends I was here, but I would be clearing a special place amongst all the rock-concert ticket stubs in my scrapbook to add this one.

I’ve always had a thing for instrumental scores. My little sister and I used to sit in front of the television as our cassette player recorded opening themes straining through the little grate of speakers. As soon as the “stop” button clacked under my fingertip, we’d plan our accompanying dance routine. At our cousins’ house, we’d act out impromptu plays to Hatari’s “Baby Elephant Walk” or “Moon River” from Breakfast at Tiffany’s. I knew the Somewhere in Time pieces so well my fingers could tap them out on a tabletop. In my mind, I was a virtuoso on piano. In reality, I plunked through selections from The Sting like someone struggling against a current.

But it wasn’t until Goldsmith’s white hair bounced in and out of his shirt collar in sync with the rhythm of his hands in a blur as Patton played that I considered the composer of a score instead of merely its respective film. It wasn’t until then that I made a point of learning who was who. Now when the names of the likes of Rachel Portman, James Newton Howard, or Michael Giachhino are read on Oscar night I pay attention with a restrained fervor befitting a narrow, button-up dress.

And the nominees are ….

I can answer questions 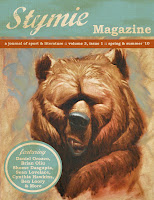 I can read aloud and other news

A few newish items to announce before they become oldish.  First up, at the Our Stories blog I read the short story that was a runner up in their 2009 Emerging Writers contest and currently available in the Best of Our Stories anthology.  Then at The Nervous Breakdown I discuss the recent smattering of sequels to ’80s action films with Simon Smithson, followed by a piece on Tron: Legacy with fellow sci-fi girl geek Gloria Harrison (surprise! we liked it).

My interview with author, actor, and screenwriter D. R. Haney regarding his new book Subversia is now up at the San Antonio Current (read it here).

A Horrifying Halloween Without Horror Films

Dear horror films:  I’m just not that into you.  It’s not so much about what you do or don’t do but just … you.  In general.  And I mean the “you” of the last thirty years.  I really loved you in your younger years, but my how you’ve changed.  Like, I don’t even recognize you anymore.  Maybe we can just agree to disagree about your merits and go our separate ways for now. Here’s a list at The Nervous Breakdown of other chill-inducing films I’ll be spending my Halloween with instead:  Halloween Lite: Same Great Taste, Less Eye Rolling.

Just what you’ve been waiting for.  TNB’s Simon Smithson and I wrap-up our exploration of ’80s action movies with a chat about the Sylvester Stallone action-hero round-up that is The Expendables.  Read it here. How To Train Your Movie Critic

Meet Hannah, the only kid I know who takes notes in movies.  As bad as I am now, in terms of movie nerd-dom, she’s destined to be three times worse.  I recently took Hannah, who has quickly become “Avatar: The Last Airbender” obsessed, to a screening of The Last Airbender and asked her a few questions afterward to get a feel for the differences between the series and the film.  You can find our conversation below and my review of The Last Airbender at The Nervous Breakdown.

Cynthia:  So, what did you think?

Hannah:  I really don’t like that a fish died.

C:  Does a fish not die in the series?

C:  You must mean yin and yang.

C:  Without giving things away.

H:  Well, Prince Zuko only had a small scar.  It didn’t really look burned like it looks in the series.

C:  His scar wasn’t prominent enough in the movie?

C:  Okay, but this sounds like you’re just finding little things that are different. What about the story, the overall story and what happens?

H:  Well, usually their visits to the different villages take a bit longer.  I was surprised the movie went by really fast.  A lot faster.

C:  And the big battle in the end – does that happen in the series?

C:  So tell me what you’ve watched.

H:  I’ve watched all of Book One except the last episode.*

C:  So you haven’t gotten there yet.  It could still happen.

C:  So what did you think of all the characters?  Were they what you expected?

H: The brother was a little different than I expected.

C:  Yes, he was quite serious in the movie.

H:  Yeah.  He was more serious.  And also when he met the princess, she was engaged.

C:  Well, sometimes they can’t put everything in because then it’d be six hours.

C:  What about Aang?

C:  They pronounce it “ayng” in the series but “ahng” in the movie, but it’s the same name.   I really liked him in the movie.  I thought he was super cute.

H:  Actually, I like him better in the series.  I think he looked better animated than in real life.

H:  Yeah.  I think he might have been sweeter in the movie, and in the series he gets fussy sometimes and I don’t really like that.

C:  You were telling me something about that earlier, that you thought he could be a real big brat.

C:  In the series, you said he did things like withheld information from the others that was really important.  Things like that.

H:  He did that several times.  I think because in the series, it’s longer than the movie.  If they don’t have time to explain him, then you just wouldn’t like him when he does things like that.

C:  So, right after the movie, you turned to me and made the “so-so” sign with your hand. Why did you do that?

H:  It was kind of iffy in some parts.

H:  There were things that weren’t in the movie that were in the series that I missed.

C:  A lot of things or just some things?

C:  Overall, would you recommend it to someone who already likes the series?

H:  Well, if I could forget about the iffy parts, then I would recommend it because it really is a very good movie.  Is that it?  Because I wanted to say something else.

C:  Sure.  Say something else.

H:  I liked Appa, the flying bison.  He looked exactly the same.  And the special effects for Appa were really good.  Okay.  That’s it.  Hannah out.

*Hannah watched the last episode of Book One the day after this exchange and reported, aghast, that, “There is no big wave!”

Fellow San Antonians:  Nicole Holofcener’s film Please Give is now playing in our area, and if you missed my review of it at The Nervous Breakdown you can still read it right here.

Too early in the morning to be LOST

You know what I’m doing at 5 am?  Not sleeping.  Like I haven’t been sleeping for the past hour and only intermittently for hours before that.  You know why?  Because when I have been sleeping I’ve been dreaming that my life is not real, that I’m in a “sideways” kind of Matrixy/Sixth-Sense purgatory trying to work it all out.  Thank you “LOST”!

That said, I’ll weigh in on the series finale (spoilers aplenty).  I would just like to take a moment to tell my husband I was SO right.  “You aren’t going to learn any more about the island than you already know,” I said to him hours before the finale began, “So, move on.”  And it would seem moving on was the whole theme.  What we thought was an alternative reality perhaps created by Jughead’s explosion turned out to be a waiting place for the afterlife in which everyone needed to find enlightenment – in other words, their memories of their real lives.  Aptly named (if not comically, as Kate pointed out) Christian Shepherd fills Jack in:  Jack’s dead in this alternate world as is everyone else.  Some of them died before Jack, others after.  The island was real for all its wonkiness, and these are the people who’d meant the most to each other in life from the gravity of their experiences together.  I’m guessing Hurley and Ben lived awhile after Jack as the new caretakers of the island since they indicate as much to each other:   “You made a great number two,” “and you were a great number one,” and so forth – and no I’m not going to make a bathroom joke.  You go right ahead.

Did the plane make it?  Let me tell you something.  The only thing that can survive a submarine blast, or any kind of doomsday scenario, are the cockroaches and crusty codger Frank Lapidus.  In any kind of disaster, I want to be standing right beside that man.  Can he fly that plane off the island?  With a little duct tape, hell yes!  He’s Frank Lapidus!  But does it make it?  Kate tells Jack in sideways afterlife, “I’ve missed you so much,” which would seem to indicate that she spent enough time to “miss him so much” after leaving him on the island.  But then again, when Claire gives birth to Aaron in sideways afterlife (gah!?) this seems to be the big reunion with him she’s been waiting for since being separated from him on the island, as in perhaps she doesn’t make it back to reunite with three-year-old Aaron in real-world L.A.

Okay, okay, probably none of this is new or insightful and there are a plethora of more detailed, more wonderful blog posts regarding the “LOST” ending … but it’s five a.m., and I’m thinking aloud!  Cut me some slack here.  I did love this as a last episode, though.  I love that just when I guessed what’s coming next I was surprised.  And I thought no one could ever pull a Sixth-Sense on me again.  The fact that Lindelof and Cuse managed to?  Brilliant.  Now shoo so I can get some sleep.

Life of the Party

My essay in the April issue of Parent:Wise Magazine:

All right, I admit it.  I was that kid who kept a rubber-worm fishing lure as a pet, set traps for aliens forged from empty TicTac boxes, wrote sci-fi stories I tried to sell door to door for a quarter, and invited to my birthday parties one special friend … of my mother’s choosing.  About a week before, I’d find Mom quietly chirping into the phone with her Sunday-school rolodex flipped back on her lap.  I’m sure she was saying something like, “I just thought it’d be nice to get our two shy girls together sometime,” because my birthday attendee would always turn out to be “that kid” too – with a variation.  Maybe she had a collection of rainbow suspenders or a habit of laughing with her mouth closed.  Sheet cakes and streamers and That Kid who refused to take off the H.R. Puffinstuff costume – ah the memories. Read More Here