Day seven and I’m beginning to think the big guy upstairs wasn’t too happy with the joke I told three weeks ago about my church’s gluten-free communion bread and the Body of Christ being worth half a Weight Watchers point because now Joe and I are sitting in the oncologist’s office listening to descriptions of a port to be surgically inserted under my skin for a sixteen-week round of chemo that will cause my hair to fall out. Then the oncologist excuses herself to take a call. The door falls shut. Joe and I look at each other.

“What do you think? Eighties big-hair wig?” he asks.

“Or maybe straight-on bald like Lieutenant Ilia in Star Trek.”

“I’ll buy you the uniform.”

The oncologist says I have excellent bone structure for bald, anyway, when she finally comes back in. “Although having a wig might be reassuring for your daughters,” she adds. She gives me a list of area shops along with a three-inch-thick folder full of everything I need to know about my treatment plan.

Back home, Hannah, twelve, is unenthused when I tell her I’ll be bald. “Creepy!” she says, pulling her shoulders in.

“Yeah, a wig that looks pretty much like my own hair.”

“Okay.” She says this with the inflection of a question.

“But every now and then I’ll sneak into your room with my wig off like Nosferatu.”

Her hair hangs straight to her waist like a fat satin ribbon, and she sweeps it back behind one shoulder with a flick of her hand and the half-snarl eye-roll of middle-school girls everywhere. And then she starts crying. “This is the worst day ever,” she says.

“I don’t want your cancer lump to touch me,” she says.

Nope. Apparently the cancer lump looms too large. Even though it’s nothing she can possibly see or feel.

When she was six, a little older than the Firecracker is now, we took Hannah to the New York City Toys R Us to show her the giant animatronic T-Rex, and she managed the courage to run past it into a corner behind its tail. Then she wouldn’t leave the corner. She just paced as close to the back wall as she could get and screamed. We tried to talk her down the ramp again. We tried to show her the rubber tail, the mechanics, the predictable twisting of the head. For maybe two seconds I thought firemen would have to come pry her out of the corner behind the dinosaur, but then Joe picked her up like a hyperventilating football and ran past the T-Rex and into the open again.

Because it’s the worst day ever, Joe takes the girls out for steak and ice cream while I go to evening workshop, the one I’d cancelled one week ago. We talk about the nature of memory, the way our memory starts to make seemingly disparate, inward connections when we listen to someone else’s story. As an experiment, I tell them about a story I’d read a week before, about the free-diver trying to set the American record and then died not long after surfacing. “Start writing down the connections you think of, then follow them, one to the next, even if it seems it’s getting too far away from the source. Your subconscious knows what it’s doing.” While pens scratch at notepads, I’m thinking about the diver, holding his breath, feeling the pressure of the water against his rib cage as he descends, all the blue, all the sound wiped out. 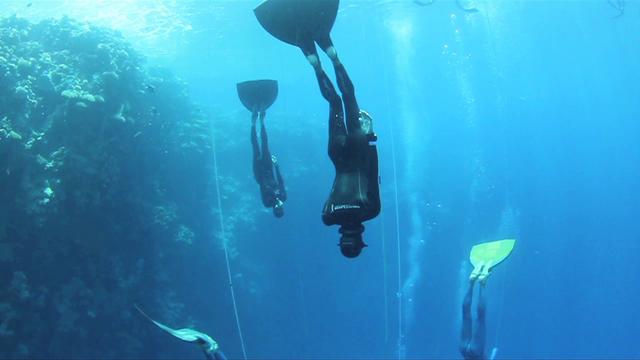 I used to sit cross-legged at the bottom of the public pool as a kid — one Mississippi, two Mississippi. And I can still feel the panic sprawling across my chest when I needed a breath and the surface shimmered too high overhead, like a warbled glass plate, the sun, a distant vaporous smear. Five Mississippi. Back then, I had a swim cap I’d stretch under water. The weight of the water as I pulled the cap through its own current pushed it wider and wider until I could fit inside. I liked to climb up to sit on the top rung of the metal ladder and pluck the edge of the cap into place around my ears. I liked the feel of it. Like a bald chick. Like Lieutenant Ilia in sci-fi white.